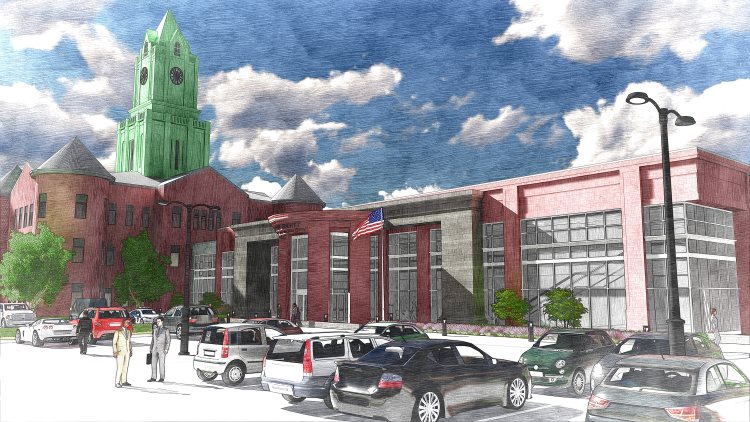 A study completed by the National Institute of Corrections determined that the existing Clinton County Justice Center, built-in 1969, was outdated and obsolete. The oldest jail of its size in Iowa, its linear design wasn’t conducive to inmates or staff safety, ADA compliance was lacking, and several maintenance issues were uncovered (no room for electrical panel expansion, the building’s exterior was cracked and leaking, heating, and cooling systems couldn’t keep up, and doorways/hallways were too small to allow for the much-needed replacement of kitchen and laundry equipment).

The study recommended that Clinton County begin immediate planning to replace the aging building. The longer they waited, the more costs it would incur. Shive-Hattery conducted a space-needs assessment to define a facility that would fit the needs of each Clinton County department, allow for efficient operation, and provide information for a successful bond referendum campaign, It was determined that renovating the existing facility was not feasible nor cost-effective.

Instead, a new 59,000-square-foot Clinton County Justice Center was designed to house Sheriff’s administrative offices, emergency operations center, the 911 emergency communications center, and a 96-bed jail with expansion for up to 126 beds. The site housing the existing jail and historic courthouse was selected as the site for the new center. Clinton County taxpayers will save money with this replacement facility through reduced maintenance costs and less money required for out-of-county inmate housing. 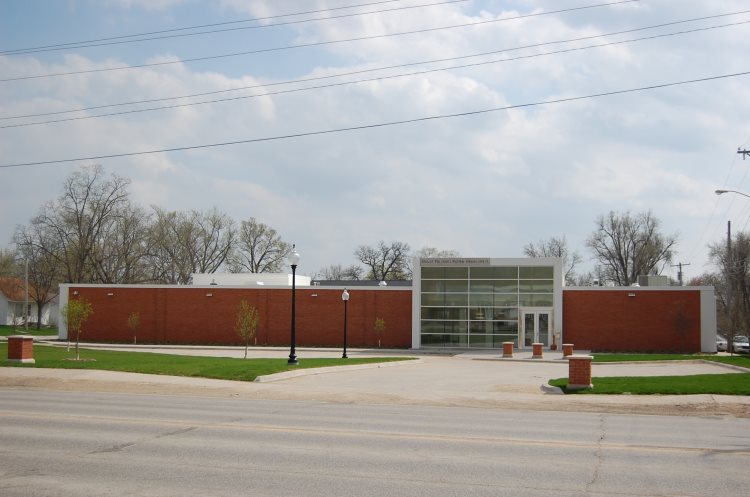 The City of Mount Pleasant hired Shive-Hattery to review a vacant grocery store building to be adapted to house the Police Department, gaining much-needed space and secure evidence storage. The 17,000 SF facility is located a short walk from the town square. The remodel included approximately 8,000 SF of new office space, interrogation rooms, weight room, locker rooms, squad room, and a training room. The remaining space is divided into evidence storage and a garage for police vehicle maintenance.

Green design principles were used throughout the new facility. The existing lighting, flooring, and mechanical systems were modified and reused. The site had in-place infrastructure, including streets and sidewalks which were reused. Street front parking lots were vegetated and used for stormwater retention which reduces the heat island effect.  Low-flow water fixtures and motion-sensor lighting conserve resources and a new white EPDM roof will reduce the heat-island effect.

The project was one of the first in Iowa to be awarded funding from the IJOBS program (financing over half the project budget) and the Main Street Iowa program recognized the project with an honorable mention award for the “Best Adaptive Use of a Building.” 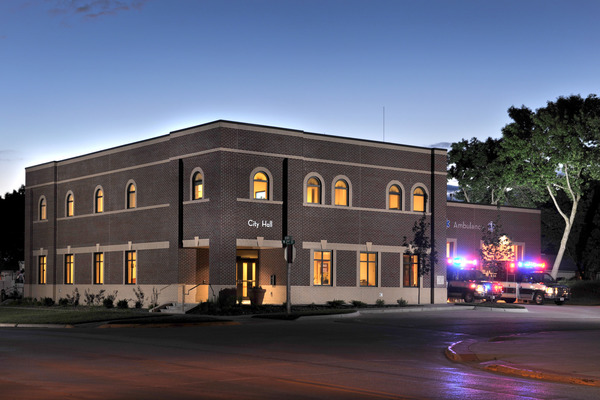 The new 12,000-square-foot City Hall, Police, and EMS facility is comprised of two major building masses. The first is a two-story office building with City Hall, City Council, and the Police Department on the ground level and Emergency Medical Services, IT, and storage spaces on the upper floor. The second building mass is a single-story ambulance bay.

The exterior is clad with two-tone brick veneer, bronze windows, and metal trim with corbelled brick arches and the second-story windows. Strong horizontal relief lines were created by stepping out individual courses of brick creating depth and shadow to the building façade. The interiors were clad in rich earth tone colors with slight burgundy accents. Stained and varnished wood trim and door panels offer visual distinction as you enter the building. Hidden light coves line the primary corridor and elegantly trimmed millwork defines the council bench and chambers.

A small new parking lot with new sidewalks complete the secondary access drive. Subtle landscaping fills in the negative spaces and roots the building to the corner of the town square helping establish its own presence within the community.

As a steadily growing community, the City of Altoona staffing and operational needs have outgrown existing their facilities, creating difficult circumstances to provide the services required by residents and investors. The City’s leaders recognized the need for new buildings to accommodate the growth of city hall, police department, and public works. The goal through the study phase was a flexible solution that facilitates staff efficiency and wellbeing in an adequately sized, safe environment that informs the community of the City’s vision and current happenings.

Shive-Hattery worked with city leadership to assess the areas of concern and make recommendations. The process started by first investigating the areas of concern and sharing best practice design considerations with each user group. Shive-Hattery then analyzed potential design solutions and developed a narrative to illustrate materials and systems that would meet the goals of the City. A series of meetings were held with departmental representatives to identify key issues and obtain a clear understanding of the spatial and operational needs of each department.