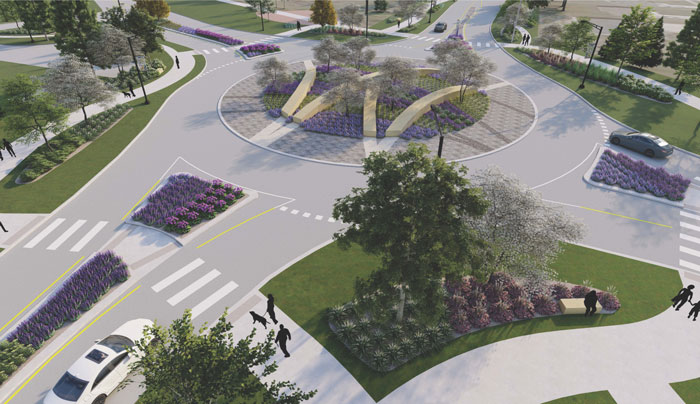 The Warrior Lane corridor is an existing corridor that was once a rural two-lane roadway that has become a heavily traveled city street. The project will reconstruct the roadway and widen it while converting from a rural to an urban cross-section.  The investment in this older part of Waukee is much needed and deserved and will shift construction focus from the fast-growing fringes of the City.

The project includes significant aesthetic enhancements, provisions for bikes and pedestrians, and a joint utility trench adjacent to the corridor to relocate underground communication facilities. Along the route, stakeholders include homeowners, a church, Waukee Schools, Waukee Public Library, and City Parks and Rec Staff with a large City park along the route. The project is planned to be completed in phases with the construction of site improvements at the public library underway and the first phase of roadway improvements scheduled to bid in December 2020. 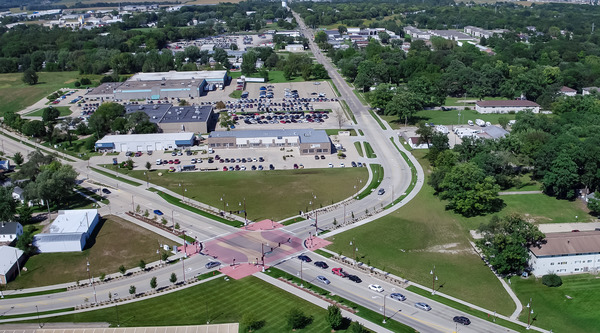 The City of Hiawatha had been looking for a solution to the tricky alignment of the Emmons Street/Center Point Road/Robins Road intersection since the 1990s. The intersection posed multiple challenges: increased traffic on Center Point Road; an area with future development potential; difficult intersection for bicyclists and pedestrians using Cedar Valley Trail; and utilities above and below ground on both sides of Center Point Road.

Shive-Hattery conducted a traffic study to determine current and future needs, ensuring the city did not overbuild. Conceptual drawings included a town plaza to helped facilitate the roadway planning. To create a distinct look, decorative traffic signal poles were installed, and colored concrete used for the middle of the intersection. Offset left-turn lanes were installed to increase visibility and safety.

To address speeds and improve safety for trail users, a raised intersection was constructed, and the speed limit lowered to 25 mph. A joint utility trench located in an easement moved all utilities below ground in one location, making them easier to work on and improving the aesthetics. The improvements complete the Center Point Road corridor from Blairs Ferry to Tower Terrace Roads. 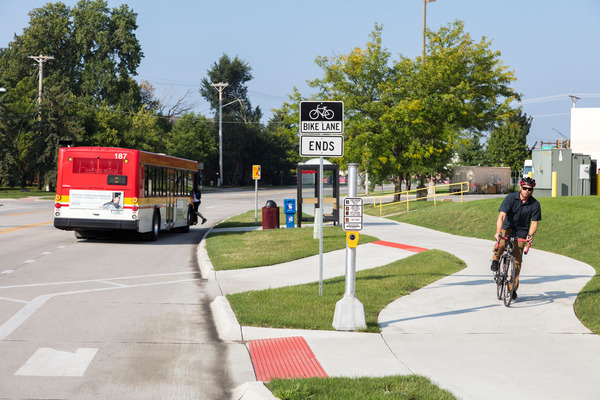 South 3rd and South 4th Street between Squaw Creek and South Duff Avenue was rehabilitated/reconstructed to improve the conditions of the pavement. The project included new bicycle facilities between South Grand Ave and South Duff Avenue. A study of potential bicycle facilities ultimately led to a “Road Diet” for this section of the corridor to reduce the vehicular traffic lanes by one and add on-street bike lanes. Pull-outs for CyRide buses to interact with the bicycle lane were also implemented in the corridor.

Road Diet
The acquisition of right-of-way proved especially difficult for the project budget and schedule due to the constrained nature of the existing corridor. Shive-Hattery completed a study of both the traffic and the appropriate bicycle facilities recommending a four-lane to three-lane conversion including a two-way left-turn lane and on-street bike lanes.

Pavement Improvements
The existing pavement condition was evaluated and pavement cores were taken in cooperation with the City of Ames staff. Ultimately it was determined the worst sections of pavement, near Squaw Creek and near Hy-Vee, would be removed and replaced. The rest of the corridor would receive a two or four-inch mill and overlay depending on the age and condition of the pavement. Additionally, the corridor was walked with Ames staff, and every manhole, intake, and water valve was opened or operated to determine if they warranted replacement.