The Fireﬁghter Cancer Support Network (FCSN) has found that 61% of line-of-duty career-ﬁreﬁghter deaths were caused by cancer from 2002 - 2016 and that in 2016 alone cancer caused 70% of the career-ﬁreﬁghter death toll. Fireﬁghters are also 9% more likely to be diagnosed with cancer and 14% more likely to die from cancer than the general population.

According to The Journal of Occupation and Environmental Medicine:

Fireﬁghters are exposed to risks to their health and well-being every day on the job; however, they should not have to be at risk of exposure to a plethora of contaminants, carcinogens, and toxins when they return to their station. The ﬁre station should be a reprieve from the caustic environs where the ﬁreﬁghters just returned from and should be focused on mitigating any carcinogens and toxins that were brought back from the ﬁeld.

EPOCH, a division of Shive-Hattery, is devoted to creating ﬁre stations that are not only functional by creating eﬃcient work ﬂows through plan, but also helping to keep carcinogens and toxins out of the living space of the ﬁre station. If a station is designed poorly, a dangerous cycle can occur 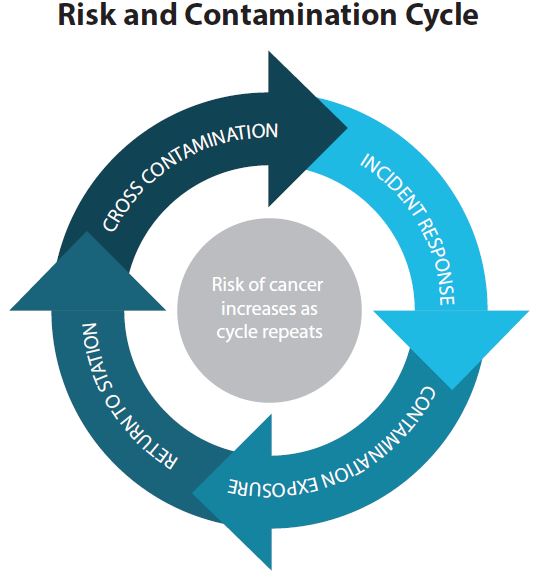 Our typical approach to a ﬁre station project is to visit a station in the department, in particular if the ﬁre station being designed/built is a replacement.  The level of input from the department varies and is deﬁned by the Chief.  Once we have an understanding of the department and station culture, we work with the ﬁre department by starting with a programming phase to determine the above.

Because of the bidding and procurement requirements often required in municipalities, more often than not, we include FF&E in the construction package, thereby elevating these costs.  We would expect a station without LEED certiﬁcation to be less.  Depending on the amount of crew members per shift, apparatus and unique space requirements, a typical ﬁre station can range from 8,000sf to 12,000sf.  This is assuming the ﬁre station only services ﬁre, EMS, water rescue, etc.