The City of Carlisle Fire Department had outgrown its 30-year-old, 4,000 sf facility. Due to their larger sizes, new fire trucks didn’t fit well into the small bays, leaving only a few feet of clearance. The lack of bay space left the command vehicle sitting outside, causing excess wear. Additionally, the facility only had one bathroom and inadequate room to shower and rest.

After investigating potential options it became clear that the most cost-effective choice was to renovate and add on to the existing building. Working closely with the City Manager, Fire Chief, EMS staff, and firefighters, the design team renovated and designed a 3,300 sf, second-floor addition.

The addition provides a second, longer bay on the south side of the building to house the department’s apparatus with plenty of room to spare. The renovation of the existing space provided a second bathroom, two locker rooms with showers, offices, a new kitchen area, meeting space, a TV area, and sleeping rooms.

Because sleeping rooms were added, fire-rated separation between the existing facility and the new facility was required. To cost-effectively meet this requirement, the firewall was moved back into the existing space.

With its newly renovated and expanded building, the City of Carlisle Fire Department now has room to house all of its vehicles and trucks. EMS staff and firefighters have room to relax and catch up on rest while they’re on call. 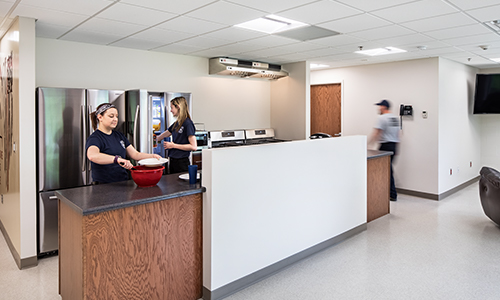