Township fire departments are often left with degrading stations and an unsafe working environment. Townships like Penn Township in Indiana are taking the next steps towards improving their fire service by replacing the current Fire Station 13 with a new state-of-the-art facility. The township and fire department expectations for the new station are to better serve the growing community within the fire territory while providing a safe and healthier environment for their first responders.

Existing Station 13 sits on the Western fringe of the fire territory, while new communities flourish on the Central and Eastern portions. The township collaborated with the local school corporation to purchase land from the school, thus locating the station further East to allow quicker response times to the growing communities and surrounding schools.

Being mindful of the township’s resources, EPOCH worked with the fire department in developing a station with an efficient footprint by mitigating areas of wasteful space. Additionally, the design allows for expansion to the sleeping quarters for future growth. The new Fire Station 13 will house crews for an engine, a tanker, two ambulances, a Swiftwater rescue boat, a community room for internal and community training, and an office for the local police department. 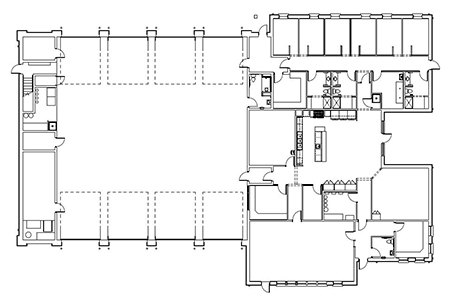