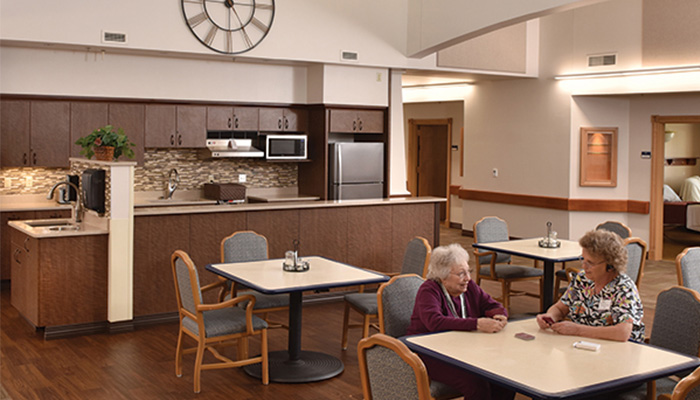 Because no one fully understands the minds of people with dementia, it can be hard to put yourself in their shoes when creating a safe, calming environment as they experience loss of cognitive functioning.  What we do know about dementia is in addition to difficulty with short-term memory, it can cause impaired reasoning and judgment (confusion), difficulty with communication and language, agitation, reduced ability to focus and pay attention, and compromised visual perception.   These symptoms, however, often impact the entire aging population – not just those with dementia.

Due to my personal experiences with the disease, I’ve spent years observing and working with individuals who suffer from dementia to find architectural and interior design solutions that help them remain functional for as long as possible.  Many designs I’ve implemented for those with dementia are based on my observations, and have been used in hospitals, assisted-living facilities, long-term care and senior living facilities around Iowa and the Upper Midwest.  In fact, implementation of these simple design concepts allowed one healthcare client to reduce medication levels for residents with dementia to the lowest recorded in Iowa.

Here are a few examples of environmental features that affect people with dementia and design solutions that are proven to positively impact their experience and behavior.

1. VISUAL PERCEPTION
Example:  Design features that look “normal” to most of us may cause confusion to someone with dementia.  Have you ever noticed a person with dementia walk around or avoid a colored floor pattern?  I have observed dementia residents slide down a corridor with their backs against a wall to avoid a high-contrast dark vinyl tile border in the floor.  Instead of recognizing color variations, high-contrast, dark floor colors are perceived as “holes” by those with dementia.  Fear of “falling in the hole” makes them nervous when moving through a facility with these design features.

Possible Solution:  Keep flooring colors and patterns light and neutral, without a lot of high contrast.  The lack of visual perception can also be used to enhance the environment of senior living facilities or memory units at any level of care.  If handled appropriately, the “black hole” perception can be used as an advantage by a healthcare facility.   For example, if there is a door, piece of equipment, or corridor that you want occupants to avoid, place an insert of black or intense, high-contrast color at these locations.  Most individuals with dementia will avoid stepping on the “hole.”

2. DISORIENTATION
Example:  Diminished eyesight and cataracts make it difficult to distinguish between vertical and horizontal surfaces without a noticeable color change.  Residents may seem disoriented and unstable when walking in spaces without color differentiation between vertical and horizontal planes.  This disorientation is evidenced by residents walking along the walls and often reaching for the wall or running their hand along the wall surface as they pass.

Possible Solution:  Provide good color contrast between floor materials, the vinyl or wood base of the wall, the wall itself, and the ceiling.  Specifying highly contrasting colors in these locations will help with stability, confidence, and mobility for those with dementia and the elderly population in general.  Because of the large elderly population in Iowa, I use this strategy when designing any healthcare facility.

3. REASONING AND JUDGEMENT
Example:  As people move through the stages of dementia, they lose their cognitive ability to understand what everyone else takes for granted.  I have observed that when people with dementia walk to the end of a corridor they are unable to turn themselves around to continue walking in the opposite direction.  As a result, the resident will stand – perhaps within inches of the end wall – totally confused with the environment and unable to move.  Since many with dementia like to wander, and find comfort in walking, the “dead-end corridor” creates a huge barrier to their independence.  One facility I visited had such a problem with this they actually hired high school students to stand at each end of the corridor to physically take residents by the shoulders and redirect them back down the corridor.

Possible Solution:  When designing a new facility always establish a continuous loop or circular walking path to give those with dementia a place to walk (wander) without obstacles that prevent them from moving forward.   In existing facilities where an “endless” corridor is not feasible, find alternative environmental approaches for eliminating the “dead-end corridor”.

In one healthcare facility I worked with, a large room at the end of the corridor had two doors.   By using contrasting colors in floor material and allowing both doors to remain open, we created the perception that the walking “path” continued right through the room – in one door and out the other.

4. VISUAL CUEING
Example:  Providing visual cues helps residents or patients calmly process their surroundings and reminds them to use various features within their environment.  Many in the early or middle stages of dementia lose their ability to toilet themselves.  This generally is not the result of the loss of sensation to use their bowels or bladders, but more often the inability to recognize where they need to go to relieve themselves.  This is where the saying “out of sight, out of mind” comes in.   If the water closets are hidden behind closed doors, what will remind those with dementia to use the toilet when they need it?  The worst condition in existing facilities is one where the resident room toilet door is behind the resident room door when the room door is in the open position.

Possible Solution:  With the advent of private resident/patient rooms we have the opportunity to eliminate doors on resident/patient room toilets.   This design feature provides unobstructed visual cueing of the water closet.  Many times “if they see it, they use it.”  In facilities where this approach was taken those with dementia have remained self-toileting much longer resulting in less staff time in physically assisting the residents to use the toilets or worse, cleaning up after accidents.

It’s important to note, however, many state and local codes require doors on toilet rooms.  Work with your local authority having jurisdiction to obtain approval.  To provide privacy when being assisted by caregivers, or when family and friends visit and the resident needs to use the water closet, cubicle curtains can be provided and pulled back behind the toilet room walls.


5. SENSE OF SPACE
Example:  People with dementia often become disoriented in terms of time and space.  Some find it difficult to sit at a table for meals or activities and become agitated to the point of not eating.  This most often occurs at round or rectangular tables.  The size and shape of the table can impact the resident’s overall wellbeing.

Possible Solution:  Provide square tables in dining and activity spaces used by residents with dementia and the elderly.  Square tables offer a sense of space by providing true corners that indicate a finite beginning and end.   Each table should be a dimension that comfortably accommodates one person per side.   When a sense of space is clearly defined those with dementia are more comfortable in their surroundings and are more able to eat or participate in activities.  Tables with dark borders enhance visual contrast which distinguishes the edges of the table surface to visually identify the limits of the table.

6. LIGHT LEVELS
Example:  Perhaps even more than the general population, people with dementia are hypersensitive to the level of lighting in their environment.  During later afternoon and early evening hours those with dementia often experience “sun-downing” where they become increasingly unsettled and confused as daylight is waning.  This increases behavior problems and may cause problems with sleeping.

Possible Solution:  Evidence proves that energy levels in residents with dementia can be influenced by the level of lighting provided.  As sundown approaches, raise lighting levels.  Adequate lighting may reduce the agitation that occurs when surroundings are dark and unfamiliar.  When designing lighting for your facility consider using multiple levels of indirect lighting that can easily be controlled and strive to reduce/eliminate any glare.   We have provided as many as eight lighting levels in dining and activity rooms which caregivers have found useful for raising and lowering activity levels throughout the day.  When staff want residents to be more attentive for activities or dining, the lighting level is raised.  When preparing for quieter activities or afternoon nap time, the lighting levels are lowered.

Improvements in LED lighting have provided new possibilities for lighting in memory units.  Electronic LED controllers which allow easy control of lighting levels and the opportunity to vary the color of the light have positively impacted behaviors in those with dementia.

7. DISTRACTIONS
Example:  Residents and patients with dementia are often distracted by small things in their environment and may spend hours tampering with them.  Fire alarms and gate latches may be intriguing to touch, but can impact their own safety or the safety of others.

Possible Solution:  Fire alarm pull stations are red to get everyone’s attention; however when a resident with dementia repeatedly pulls the fire alarm resulting in the facility being charged false alarm fees by the local fire department, something has to be done to correct the situation.

Try installing a clear thermostat cover over the fire pull.  If this does not solve the behavior, after gaining approval from the authority having jurisdiction, turn the fire alarm pull up-side down.  The natural human tendency is to pull the fire alarm lever down.  Pulling the fire alarm lever upward is unnatural and is more likely to prevent those with dementia from initiating a false alarm.

Gates or half doors are often used within nursing areas in memory care units with the intent of keeping residents out of staff work zones.  Their locks and latches seem to attract the inquisitive resident.  Manufacturers make a trick dead bolt that looks like any other surface-mounted dead bolt except that the visible knob is fixed and an activating recessed button is concealed on the bottom of the dead bolt housing.  Staff can easily open the gate with little visible effort, but the “secret button” is hidden from the resident.

Possible Solution:  Design your mirrors with a narrow slot along one side of the frame.  Provide a matching piece of plastic laminate to install through the frame and in front of the mirror.  This solves the problem of the “stranger in the mirror” without requiring frequent modifications to the facility based upon the needs of a single resident.

Another Trade Secret:  If your environment of care supports the need for a medicine cabinet in each resident room toilet, specify a magnet lock device on each of the medicine cabinet doors.  There are no visible pulls, locks, or keys for the resident to fiddle with and nursing staff simply carry a magnet that retracts the lock.

9. FINISHES
Example:  People with dementia see and imagine “creepy, crawly things” in finishes that have a heavy or prominent speckling appearance.  The size and shape of the speckling may impact the hysteria exhibited by the resident.   Long, curvy forms may be perceived as snakes or lizards, whereas, small, fine-textured speckles may seem like gnats, bees, or spiders.

Possible Solution:  Work with your interior designer to select finishes with uniform colors and textures for floor and wall finishes as well as furniture upholstery.

IMPROVE YOUR DELIVERY OF CARE FOR DEMENTIA
Adding lighting levels, changing table shapes, and selecting appropriate finishes may seem like small changes, but they can truly impact healthcare spaces making them safer for those with dementia.  Shive-Hattery has decades of experience in designing spaces for all types of senior living and dementia care for all aging populations.  To learn more about our design ideas and success stories, see our senior care/senior living portfolio or our healthcare portfolio.