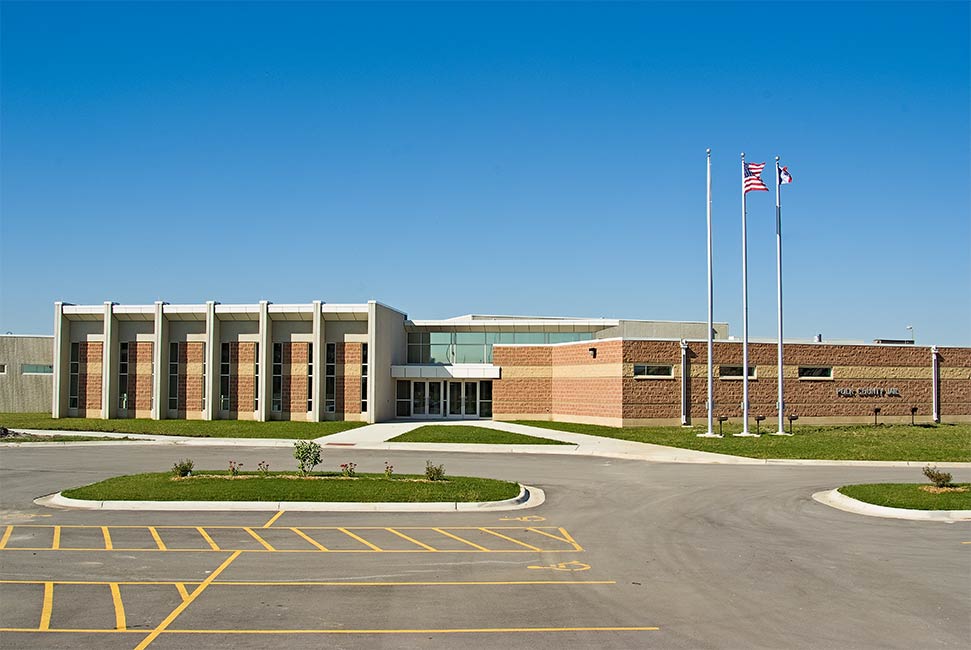 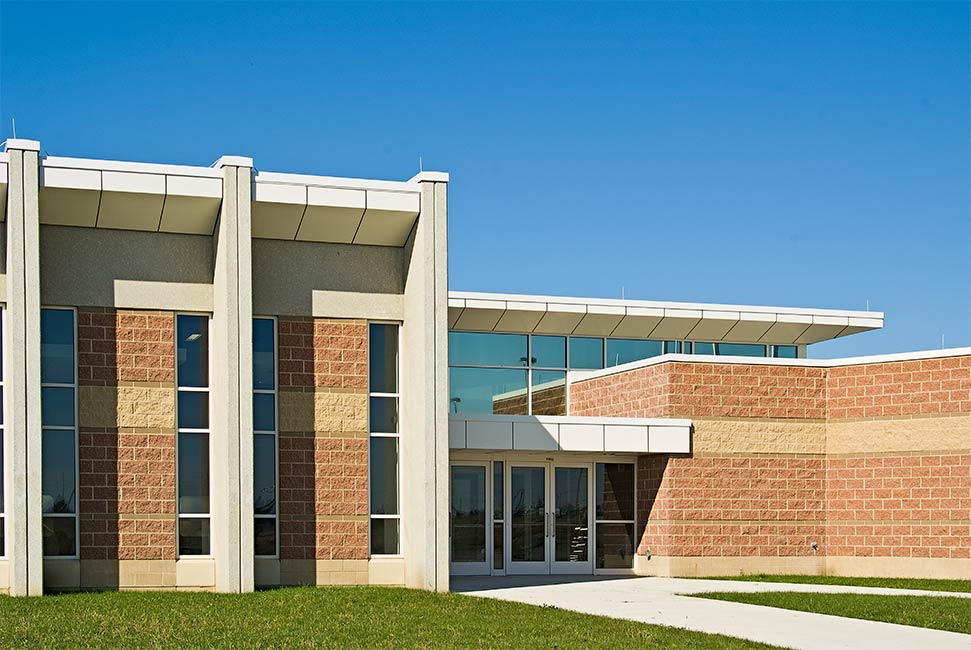 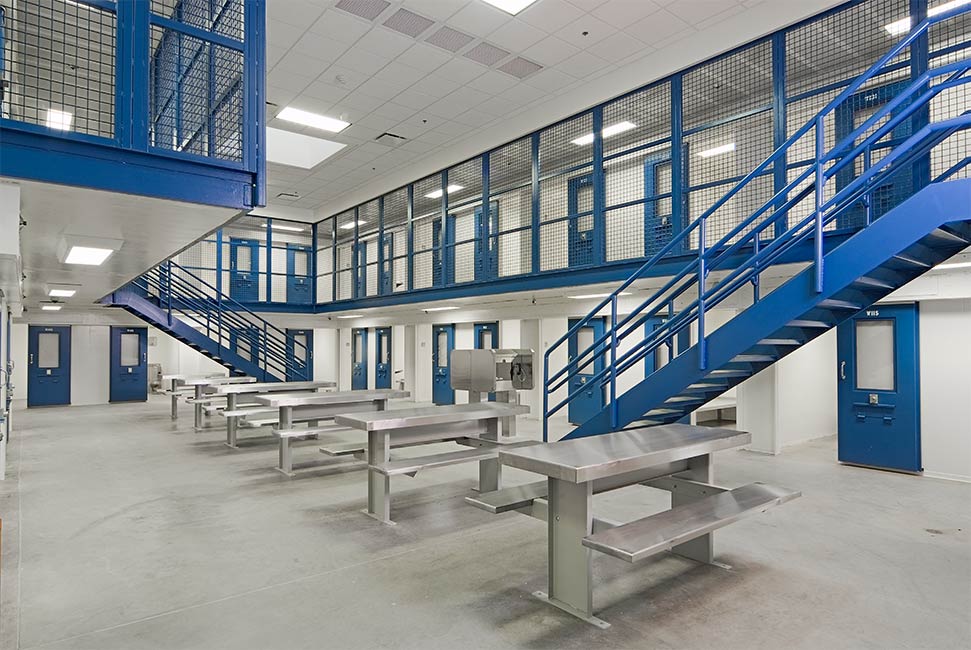 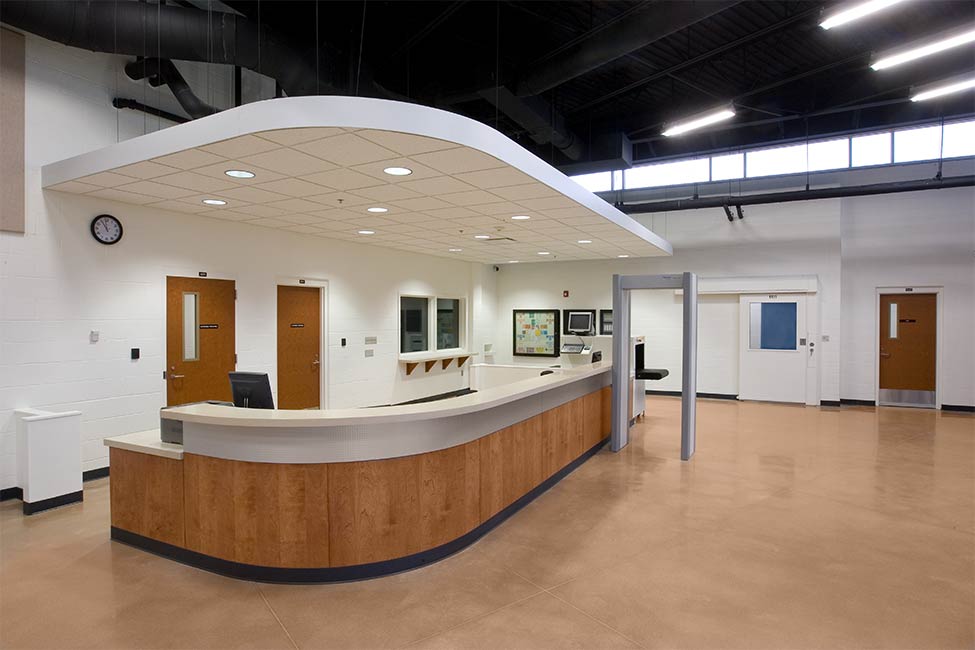 After many years of issues with capacity and the aging of existing facilities, the Polk County, IA jail was facing significant long-term operational cost challenges. This included housing offenders in other jurisdictions and the possibility of operating multiple facilities. The County needed to find a solution to alleviate overcrowding issues in the county jail and curb potential operational cost implications. From the early 1990s until the new 1,512 beds jail opened, Polk County was only able to support its entire inmate population for a period of three months in 1997 in existing facilities operated by the county. Staffing, inmate care, and out-of-county housing costs represented nearly 85 percent of the cost to operate. Existing jail facilities operated at a highly inefficient 2.29 inmates per staff ratio.
A comprehensive study authored by Shive-Hattery justice planners evaluated six possible options. Considerations included the systemic impact of a new facility, the operational effectiveness, custody configurations and locations of the various options. After reviewing short and long-term cost implications, the Board of Supervisors ultimately choose to construct a new county 1,512 jail facility on a site 14-miles north of the Des Moines capital business core. The first public referendum vote passed by an unprecedented 69 percent.

The team designed a 325,000-square-foot multi-classification jail to accommodate 1,512 detention beds with potential expansion to 2,500. All support areas of the building—including an initial appearance courtroom, sheriff administrative offices, a decentralized full service kitchen, medical services, infirmary housing, booking and release processing space—were designed in the initial phase of construction to accommodate the maximum capacity of the site. The inmate housing areas were designed to accommodate six classification levels.

Sustainable design strategies were implemented in an effort to improve long-term building performance. Bundled strategies were developed to reduce the annual energy use by 28.5% above the base code model. This was accomplished through thoughtful consideration of the building positioning configurations, materials and system selections, daylighting strategies and engineering systems life cycle performance projected outcomes.

Polk County and the Greater Des Moines Community have benefited in a multitude of ways. First, capital construction of the project was delivered at a time and on budget when comparable facilities were being completed in the Southeastern United States at a cost per square foot that was 34% higher to construct than the cost to deliver this project. When fully occupied the facility operationally will be very efficient; with tripled the county's bed capacity while only doubling the number of staff required to operate the facility on a 24/7/365 basis. By improving the staffing efficiency of the facility, the county has significantly improved its ability to proactively manage one aspect of the life cycle cost that influences almost 54% of the costs to operate the facility. Finally, through the selection of sustainable materials and systems, the county has the opportunity to greatly improve the long-term energy performance of the facility over the operational costs associated with maintaining two existing jail facilities, a significant benefit to taxpayers in Polk County, Iowa.